If you are looking for a collection of expensive dates to really impress your sweetheart then this ISN'T IT. But if you want 100's of inexpensive dates that cost from $5-$20 then you have found a goldmine of information. Whether…

…you want to make a big impression to secure a second date, put your relationship back on track or just have more fun, keep reading, as this may be the most important letter you ever read…
Did you know that while going out for dinner and a movie is one of the most popular dates, it is also one of the very worst dates you can go on? -- especially for couples in the early stages of dating!

Don't believe me?
Imagine this. You're sitting at a restaurant with your beautiful date and everything seems to be going fine. But after ordering your meals, you realize you can't think of anything interesting to talk about. You try to think of something… anything!…
At that moment, your palms sweat, your heart thumps, and your mind begins to race at 100 miles an hour, as you notice your date looking around the room disinterested.
And after two hours filled with awkward silence and generic questions, you take her home…

…only to be struck with the cold sinking feeling that you blew your chances forever.
Still think dinner is a good idea?
Don't get me wrong, dinner can be great but it's just too hard to make a good impression over dinner.
And if you're always going on dinner dates with a long-term partner, it's likely that things are getting a little stale and you're dying to try something new. 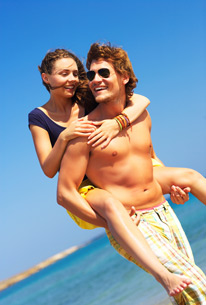 Dinner dates are a bad idea! It's just too hard to make a good impression.
Either way, you want to keep having lots of fun with a special someone and you know that going on original dates is perhaps the very best tool to accomplish that.
But Finding Unique and Creative Date Ideas Is The Hard Part!
Let's face it, trying to come up with cool unique date ideas is tough!

Honestly, it could take you hours searching only to come up with average ideas like: "spend the day at the beach or cook dinner at home." These ideas are 'okay' but there are much better ideas.
And that's where I come in.
You see, after realizing that people are starving for new and refreshing ways to spend time together, I decided to sit down, recall and write down all the fun-filled dates I've had with my wife Athena over the years. The result is a quality collection of date ideas from friends, family and myself.
But Why Should You Listen To Me and My Dating Ideas?
My name is Michael Webb.

And for the last 17 years I've been teaching people how to have fulfilling and successful relationships that last a lifetime through the power of romance.
In fact, because of some of my dating and romance ideas, media around the world have taken to calling me "The World's Most Romantic Man," "America's Romance Expert," "Mr. Romance," "The Martha Stewart of Romance" and other interesting monikers.
I don't necessarily agree with the titles, but I do aim to be the world's most loving husband to my wife of 22 years, Athena.
Some of the media Michael Webb has appeared in: 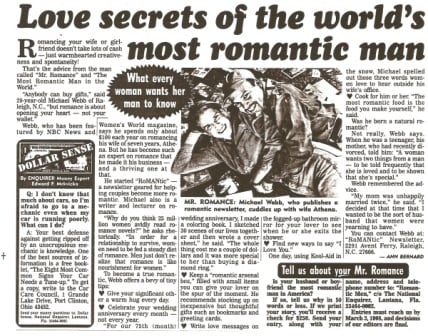 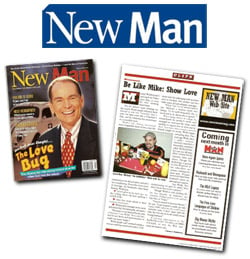 Not to mention I have been featured in media countless times.

Including every major newspaper in the United States, dozens of magazines and over 500 radio and TV shows such as Oprah, The 700 Club and Men Are From Mars / Women Are From Venus, sharing my tips and secrets with millions of viewers worldwide.
In addition, I am also a bestselling author of 18 books on love, romance and relationships.
My first book, "The Romantic's Guide" is an international bestseller. It was released in February 2000 and is already in its tenth printing.
All in all, I am regarded in the media as one of the nation's top experts on love, dating and relationship matters. So YOU KNOW you're in good hands with my date ideas.
But that's enough about me… here's what you get inside my book called…
300 Creative Dates!

Most of the dates inside are easy on the budget–date ideas for less than $20. Of course, be mindful that not all of these ideas will work for you. We are all unique in our own special way.

Find the ones that will work and adapt them to your particular style and situation and let this book inspire you to create your own exciting dates!

NOT AVAILABLE
IN BOOKSTORES
Here's Just a Taste of The Ideas You'll Get Inside This Valuable Resource…
You'll discover…
With this material, you will be the envy of every man and woman within hundreds of miles. Your dates will be so impressed with your outings that they will certainly tell all their friends how romantic and creative you are.
And ladies, you need to plan some creative dates too! The more you put into your relationship, the more you will get back out of it.

Use the ideas in this book to alternate the planning of date nights between you and your sweetheart.
I'm so certain that you will find 300 Creative Dates to be the very best resource for improving your date nights that it comes with a money-back guarantee. If you are unsatisfied for any reason, send it back for a full refund. No questions asked!
You have NOTHING TO LOSE! 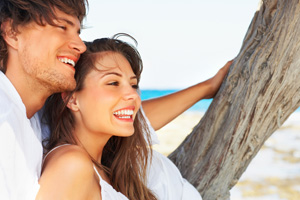 Unique date ideas for first dates, birthdays, anniversaries, long distance relationships and much more…
Really keeps things fresh and there are lot
of ideas you haven't heard before."
– Brian, Potomac, Illinois
"she immediately accepted. We have
gone on 3 more dates since"
There was a lady that I had been interested in for a while and I had asked her out 3 times before but she kept saying know (sic). I didn't get the feeling that I repulsed her or anything like that. I considered that perhaps she wasn't interested in just going out for dinner.

And if you order now you'll also get…
3 Special Bonuses When
You Grab a Copy Today
Bonus #1: Dating Bible: A Better Way To Date
(Sells elsewhere for $39.95)
Right now, get a copy of Michael Webb's dating bible, currently selling for $39.95 elsewhere, totally free.

This 224-page book has been praised in over 250 magazines and newspapers for its "ingenious and creative" tips on romance.
Inside this best-selling book you'll discover hundreds of creative and inexpensive ideas for gifts, dates, celebrations and ways to say "I love you."
This book has been on top of the love and romance best seller list for over four years and usually retails for $15.95.… but it's yours free!

You'll learn…
Bonus #3: The Newlywed's Guide
To a Happy Marriage
(valued at $14.95)
This guide reveals how newlyweds can build a truly happy life together. 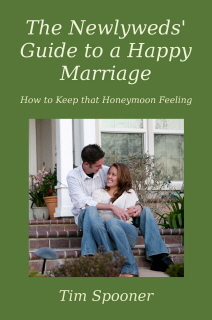 You'll discover:
If you bought all these books separately on their own websites you'd have to pay $72.85 but if you order today, I promise your total investment will only be $27.
Don't Decide Now - Just Say 'Maybe' And Try Everything At My Risk… 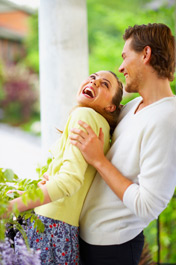 Memories you'll cherish for a lifetime!
Now, you still may not be convinced that this will work for you. Perhaps you feel your situation is uniquely different.


I know you probably feel nervous or unsure, just like other people did, before they bought this book.
So that's why I've reversed all the risk by giving you 30 days to try out the tips in the book.
There is absolutely no way that you can lose–except by not taking me up on this risk-free examination of "300 Creative Dates."
You either have 100 times more fun on dates, or get your money back! You can't lose! In the future I may decide to sell the included bonuses separately. So grab your copy today and lock-in these bonuses for free!
Here's How To Grab Your Copy Of
'300 Creative Dates' Right Now!
For your privacy you'll be discreetly billed with the name "CLICKBANK."

Once you have ordered on the secure server, you will be taken to a special download page where you download the book along with your free bonuses.
The books are all in PDF format, which can be viewed on any computer (PC or MAC), smart phone, tablet or ebook reader.

NOT AVAILABLE
IN BOOKSTORES
You will be downloading and learning from this breakthrough information within just a few minutes and using it to have more fun with your date.

So if you're ready, it's time to click the order button…
Add To Cart

You will receive instant access to the
book and bonuses (Even if it's 2:00 AM on a Saturday)
Warmly,

– Michael Webb
P.S. Even if you decide you don't want to keep "300 Creative Dates," the bonus books are yours to keep. You have nothing to lose - but a lot to gain.